We left Santa Barbara around 1600 and headed back toward Santa Cruz Island in hopes of reconnecting with Rum Doxy at Pelican Bay. Unfortunately, we couldn’t see them on AIS and were unsuccessful in raising them on the radio. So, given our plans to rendezvous with the Summer Camp kids on Catalina the next day and the fact that it was starting to get dark, we decided to mosey back to Yellowbank to spend the night. We ended up dropping the hook in the dark, but because we’d just been there a few days earlier, we were pretty comfortable with the holding and our spacing on our neighbors. It was a lovely evening. We lolly-gagged the following morning before heading off to Catalina around 1300. 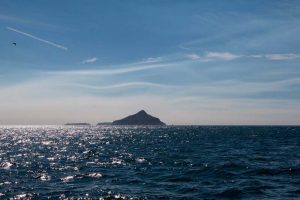 Anacapa in the morning