The High Road? What we mean is that we took a meandering northern route from Michigan back to the west coast. When the time came to leave Michigan after six weeks, it was bittersweet – we truly enjoyed settling in with family and friends for the extended stay, but we were jonesing to get back on the road to do some more camping, see more sights, and more family and friends. We had given ourselves a little more than a month to get back to San Diego (just in time for Rand’s second birthday party), and the plan was to check off a handful of national parks and visit a smattering of buddies who are spread out across the country. The number of stops was many, but more importantly, the number of photos taken along the way was ridiculous. Because of this, we divided the road trip into multiple blog posts to minimize photo overload. Hope you enjoy traveling with us!

Our first stop was Rainy Lake in Ontario, Canada, to visit the crew of S/V Striker – David, Eileen, and black dog, Jack. We met this crew down in Mexico a couple of seasons ago and became fast friends. They’re seasonal cruisers; that is, they spend part of the year down in Mexico aboard Striker and part of the year in the States between their home in Portland, OR, and their quaint little cabin on Rainy in Canada. At the latter is where we caught up with them – well, put more accurately, it’s where we barged in on them, as we invited ourselves to their private island paradise.

To get there, we blew through a tiny bit of Wisconsin, taking only a moment to visit the Northern Great Lakes Visitor Center in, believe it or not, Eileen, WI. Next stop was the Duluth Grill in Minnesota for some yummy vegetarian grub (yes, in Duluth!), and a little work time for Rand at the Dovetail Cafe & Marketplace. We pitched the tent at the Kabetogama State Forest’s Wak-em-up campground, a bit south of International Falls, MN, on Lake Vermillion. It was a gorgeous, tranquil evening filled with calling loons and a glowing sunset. The following morning, we met David in Fort Frances and made the boat trip north to the island. 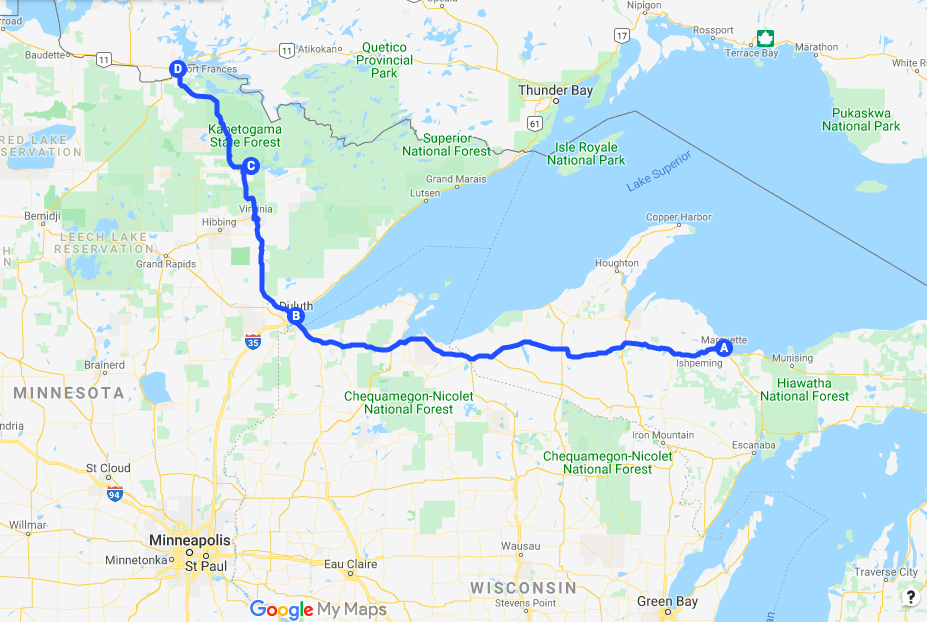 While the international border runs through Rainy Lake, ecosystems and watersheds do not adhere to arbitrary political lines. The lake is over 220,000 acres and supports more than 2500 islands, large and small, most of which are in Canada. On the U.S. side, over a million acres are designated wilderness, national park, and national forest lands known as the Boundary Waters; on the Canadian side, provincial park lands form an expansive, contiguous landscape with U.S. holdings. Collectively, over two million acres of highly valued boreal and temperate hardwood forests and ginormous bodies of water are protected, thanks to some forward thinking back in the early 1900s.

In the early 1970s, when Canada was still selling Crown lands, David’s dad built the little cabin on the little island as a family getaway, and David and Eileen continue to enjoy what this truly special place has to offer. They’re mostly off-the-grid, but for the cell booster that gives them the ability to text, keep up with the news (which isn’t always desirable), and stream some YouTube. Sometimes. They’re powered by the sun – a big blow took out their wind generator – and use propane lanterns with old-school mantles for light after dark. They were generous enough to provide water taxi service from Fort Frances (about a 30-minute jaunt aboard one of their many boats), cozy sleeping accommodations, amazing meals, fishing expeditions, and boats, boats, boats! We enjoyed some sailing and kayaking, and oh, we were even able to practice our golf swing from a platform that David built above the water (the fluorescent orange balls float, so we shagged from the kayaks). It was a glorious getaway.

While we’d only intended to stay a couple of days, a classic Midwestern summer storm encouraged us to stay put. Storms in the Midwest are unlike anything this California girl has ever seen. The clouds roll in black as night, the wind howls, and thunder rumbles and lightning flashes constantly. It was nuts, so we’re glad we didn’t attempt to get back to Fort Frances by boat. Plus, it meant we could eat the prize wall-eye Rand and David caught earlier in the day. After filleting the fish, we sat back to watch the bald eagles, ravens, and gulls come in for the dregs. Fun times. And so incredibly beautiful and quiet. Thank you so much, David, Eileen, and Jack! Don’t be surprised if we barge in on you guys again in the not-so-distant future!

Thank you so much for sharing you’ve done such a nice job relaying our experience at Rainy. You guys are welcome back anytime.

Awe, thanks! It truly was one of the most memorable and special stops on our road trip! Can’t wait to see you guys in Mex!!