Well, the 2017 Christmas holiday with SNL, Adventurer, and Ripple was an absolute hoot, but the 2018 New Year’s holiday took the cake. Flea, Lea, and Stace arrived on Dec. 29 for 10 days of relaxing, whales, whale sharks, sailing, snorkeling, lounging, socializing, sleeping, sleeping, sleeping, drinking coffee (and expelling the coffee and emptying the honey bucket), drinking tequila and beer (and more expulsion), playing cards and, of course, eating like queens, thanks to Capt. Randy and noms in La Paz. Initially, the plan had been for the girls to meet us in La Cruz on the mainland, but because of the timing of our return from our month in the States and Thad and Kristin’s visit to La Paz, we decided it’d be best for the girls to come here, and we’re so glad they did. It became evident how utterly different The Baja is from the mainland in terms of proximity to different cruising gems. From La Paz, Espíritu Santo, Partida, and Balandra are all within spitting distance and offer so many anchoring options. Many of the anchorages, however, are exposed to winds from the NW, W, and SW, so we crossed our fingers for favorable conditions and boy did we luck out. We certainly had some breezes but nothing formidable enough to chase us away from any of our selected spots. This is not to say we like The Baja better than the mainland; it’s just very different in terms of the cruising grounds. Next year, the girls will meet us in Bahía de Banderas to sample to environs on Pacific side, right girls?

So here’s the lowdown on the visit with the girls and our New Year’s celebration with our boat family – SNL, Adventurer, Ripple and Sea Esta:

Day 1: Rand, Thad, and Kristin went to Chedraui to provision for the upcoming week. The girls arrived! Together with SNL, we all wandered to Claro Fish Jr. for food, Harker Board for beer, and La Fuente for ice cream, of course.

Day 2: Some last minute provisioning (i.e., más tequila), then motor-sailed to Ensenada el Candelero at Espíritu Santo to meet SNL, Adventurer, Ripple, and Sea Esta. Rand crafted an amazing eggplant parmesan while underway, and we spied jumping rays all around us.

Day 3: New Year’s Eve – The fleet spent the day SUPing, snorkel/swimming around the island, lounging on FL, then enjoyed a potluck dinner on SNL and FL, who had rafted up. Dinner included: artichoke jalapeño dip, delightful cheese and crackers, chips, soup, salad, enchilada bake, mashed potatoes, and cookies. Dinner was followed by just trying to stay awake, so we resorted to Cards Against Humanity and a dance party (including pole dancing – I will not name names). All but two Pop Tarts (the moniker given to the first to either throw up or pass out; I will not name names) made it to midnight.

Day 4: New Year’s Day – Sea Esta took their leave and headed back to La Paz. The remaining peeps went for a hike ashore and enjoyed the sun and water. Then we coerced Thad and Kristin to host movie night on SNL. They’re the obvious choice for this activity given they have an 80-in screen (that collapses) and a projector, AND Thad makes a mean bowl(s) of popcorn! Thanks, Thad and Kristin!! Oh, the movie selection was “Overboard” with Kurt Russell and Goldie Hawn. Excellent choice; an underappreciated classic.

Day 5: SNL departed at sunrise to get back to La Paz and prep for their trip home to Colorado. FL waited to leave until after our morning coffee, Ripple followed, and Adventurer headed to Bonanza as a jump-off point for their crossing to the mainland. FL followed humpback whales breaching in La Paz Bay on the way back to town. A-mazing. To top off the day, we had a sushi date with SNL and Ripple at Costa Baja. To get there, we piled seven in a small taxi hatchback that had a suspect clutch. Haha! But we made it, and were treated to a delectable dinner by SNL. Thank you, again, Thad and Kristin!!

Day 6: Back in La Paz now, so we did a little reprovisioning in advance of heading out to Balandra. Together with Ripple and L’ Chaim, we stopped by Harker Board for pizza and beer and La Fuente for ice cream, of course.

Day 7: Grabbed breaky with the girls at KM-0 and did a bit more reprovisioning (Dulce Romero bakery), and took off to Balandra. We spotted four or five whale sharks just outside the main channel, and spent a half hour or more enjoying the show. Such a beautiful treat for the girls! The breeze built as we approached Balandra, so we tucked in just off of the northernmost beach. The wind kept things cool (ok, cold), so none of us braved the water until the next day.

Day 8: After a loungey morning, we did some snorkel/swimming, went on a dinghy excursion, and played on the dunes. Enough for one day.

Day 9: After breaky, we went for a long, warm hike that offered all of the stunning views we wanted to share with the girls. Once back to FL, we weighed anchor and moved across the bay to do some snorkeling on a little reef that remains in relatively good condition given all the attention foisted upon it by tourists. Then it was time to head back to La Paz to start easing back into city life for the girls.

Day 10: Had a late breaky at Anzuelo, a video chat with Tannika in France, then shuffled off to the Museo de la Ballena (Whale Museum), where we received a fabulous guided tour by a youngster named Homer, who longs to go to college to become a scientist. We sure hope he gets there. Then it was our last supper together at Puerto Amor, our last ice cream together at La Fuente, and then we finally played a card game called hand and foot and stayed up til after 11 pm! Way to rally, girls!

Last day: Sadly, we loaded the girls into a taxi for their trip back home. Once they were on their way, we tidied up da boat and did a walk about town to gather fishing gear and provisions for our crossing to the mainland. Our last night in La Paz was spent enjoying drinks and dinner at Dulce Romero with Gwen and Jim of Sea Esta, who we hope to see on the other side soon enough.

And then we were gone. We departed La Paz on Jan 9 after delivering treats procured at Dulce Romero for the Marina Cortez and Anzuelo staffs (Ruben and Abigail). I am a bit sad that we didn’t say so-long to our favs at La Fuente, but we’ll see them in April/May. We’d also hoped to hang out with Ripple in Los Muertos as we waited out a norther, but instead they were stuck dealing with water maker issues in town. We’ll look to see them on the other side, too, along with several other sailors to whom we’ve become attached. Lots of love in this sailing community, but all too often we’re going our separate ways; it just makes the reunions that much more sweet. 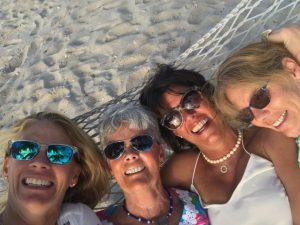 Speaking of sweet reunions – seeing Flea, Lea, and Stacy again was a much needed injection of BFF love. We were glad to provide Flea a haven from the goings on at home after just losing her dear Mom (ML) to ALS just before Thanksgiving. And during their visit, our sister-in-law, Gretchen, lost her Mom (Gayzie) to the big C. Stacy lost her Mom in 2015 and I lost mine in 2016. It’s been a tough go for us (and several others at home who lost a parent, too) these past few years. We shed some tears together, shared some memories, and gave each other strength. Thanks for coming girls – hopefully, we’ll see you again in May for the West Coast Multihulls Baja Rally? Yes, please.

So, enjoy the photos (lots and lots of selfies) and the vids. Thanks to Adventurer for theirs, which highlights New Year’s fun (if Rand didn’t want a drone before, he really wants one now). Happy new year, everyone. Can you believe it’s 2018?!

If you like what you see from S/V Adventurer, check out the extensive collection of their videos on their YouTube Channel – good stuff!

Such a great life you lead and so fun to tag along online and in photos! Looking forward to joining you guys in real time in the not too distant future. Love and joy, Nan in Ninh Binh

Talk about leading a great life, Nan! You are killin’ it! We’re loving your IG and FB feeds and looking even more forward to real time with YOU! XXOO

Terrific job documenting the trip jodes…I laughed & cried all over again remembering the fun we had. See you guys in Loreto xoxo

Thanks, Flea. We truly wish you could be on da boat for an undetermined amount of time. You’re so good at keeping the Capt. in brewskis. Haha! We LOVE, LOVE, LOVE you! Yes, see you in Loreto! Whoot whoot!

Jodi! Love all the wonderful pics! Thank you both for the most amazing trip. Loved getting to just hang out spending time in your new life! Can’t wait to do it more often and for longer! Maybe we will get the boat waxed on the next trip….. or not
Definitely more hand and foot! And Randy’s cooking

It was amazing, Stace. You guys brought the good wildlife karma! Come back! You’re welcome to be entrenched in this life with us whenever possible. Love yous tons!

Great post and pics!!! We miss you guys but feel so fortunate the lovely times we all spent together. Xoxoxo

Awe, glad you enjoyed the post. We’re so, so glad we connected with you guys, too, and wish it wasn’t so short lived! Definitely keep in touch and let us know where and how you are from time to time! 🙂