The Beautiful Baja – and Sad So-longs

After taking care of some logistics in Mazatlán (which have changed since making all the arrangements – more on that in the Addendum below) in preparation for summer travel, boat work, etc., we sailed across The Sea to The Baja (approximately 300 nm, depending on where one makes landfall). The docket looked like this: Get to La Paz; reconnect with Thad and Kristin of She’s No Lady, Mike and Nancy of Shanti, and Vicki and Jason of Volaré; hit up some of our favorite LP haunts (Harker Board, La Fuente, Dulce Romero); doddle our way north to Puerto Escondido where we would meet up with the fleet gathering for the 10th Annual West Coast Multihulls Baja Rally; hang out with Rand’s childhood buddy, David, for a few days in the Loreto area; and then beat feet back to Mazatlán (which instead became getting back to La Paz) to put FL to bed and head home for a bit.

As evidenced by all of the photos and video, we had a wonderfully busy few weeks with friends, friends, and more friends. The blissful yet sometimes sporty sail across The Sea landed us at places we’ve blogged about before – Playa la Bonanza on Espíritu Santo, Puerto Balandra, La Paz – and then firmly in the laps of our brethren, Thad and Kristin, where we would remain, very happily, for the next couple of weeks. We buddy boated to Isla San Francisco, where we tried to raft-up, but were forced to detach at midnight because of sideways swell; Rincón, where we rafted-up again, but were too stubborn and rode out some minor sloppy chop; then we ventured further north to Punta San Telmo, Candeleros, and Honeymoon Cove, where we were witness to one of the most amazing wildlife spectacles of our lives – hundreds and hundreds of schooling and breaching mobula rays. As Tannika would say, with typical enthusiasm yet understatement, “WOW!”

After a quick provisioning trip to Loreto and a fun overnight with Craig and Krystle of Small World, it was time to grab a mooring at Puerto Esco and watch all the multihulls and our token monohull, Volaré, roll in for the Rally. It was a gathering of 15 boats (more than double previous years) and more than 40 sailors. We’d anticipated the Rally for many months and were even more excited after a wonderful meet and greet on the docks and the kick-off dinner catered by Pepegina’s at the Puerto Esco Marina. Our first stop was Bahía Salinas on Isla Carmen. We enjoyed a slow sail/motor-sail, but the evening was a bit lumpy – churning things up.

The following morning, the fleet would move on to Isla Coronados, and that was when the trouble started… Over the fleet net, it came to light that several people were experiencing some, um, gastrointestinal distress. Was it the ceviche? Was it the salad? Not sure we’ll ever know. In all, over the next couple of days, 13 of the 15 boats were affected and all but 4 or 5 of the sailors were struck down by Montezuma’s. But let’s be clear, this was an anomaly for Pepegina’s. We’ve eaten there numerous times and enjoy the food immensely. We attribute the outbreak to catered noms they don’t normally serve and/or the food handling. We’re pretty sure they brought people in to help with the event, and, well, we can only guess what happened, but we know the outcome. This little intestinal bug resulted in us and SNL breaking off from the fleet and staying put at Coronados to recover. It was a good call, but we were sad to see all those boats and the rest of our friends sail away.

Once we felt well enough, we buddied back down to Candeleros, which would be SNL‘s last stop before pushing south to San Jose del Cabo, where they would turn the helm over to our friend and delivery captain, Jim, for the bash back to San Diego. Volaré caught up to us here and we enjoyed a beautiful sunset, a contentious euchre challenge (girls against boys, of course – AND THE BOYS WON! WHAT!!??), and a final toast to SNL. We awoke at first light to see her weigh anchor and putter out of the bay. Sad to see her go, but excited for Thad and Kristin, as they move into a new phase of their adventurous life together. Sigh…

Then it was back up to Puerto Esco, this time to see Vicki off and spend a few lovely days hangin’ out with David, playing cribbage, sailing around, and chewin’ the fat. Fun, fun times with wonderful friends on The Beautiful Baja. Despite some waves of melancholy, our hearts are happy.

Seems like we have a lot of fun, doesn’t it? We do. It’s true. But along with the fun part of the sailing life comes the sad part of sailing life. That is, along the way, we’ve known and met so many wonderful people who, ultimately, go their separate ways. Take, for instance, Thad and Kristin on SNL. We’ve been sailing and playing euchre (and a lot more) with them for nearly 7 years, starting in San Diego when we were neighbors at the Bay Club Marina. We are so stoked that we were able to spend the last couple of weeks in Mexico with T/K as their time on SNL came to a close. But, the time has come for them to take a different (read: terrestrial) path, so we’ll miss them on the water. We’ll certainly make plans to connect other places – on land and at sea, but for now, we’ll have to rely on our virtual connections. 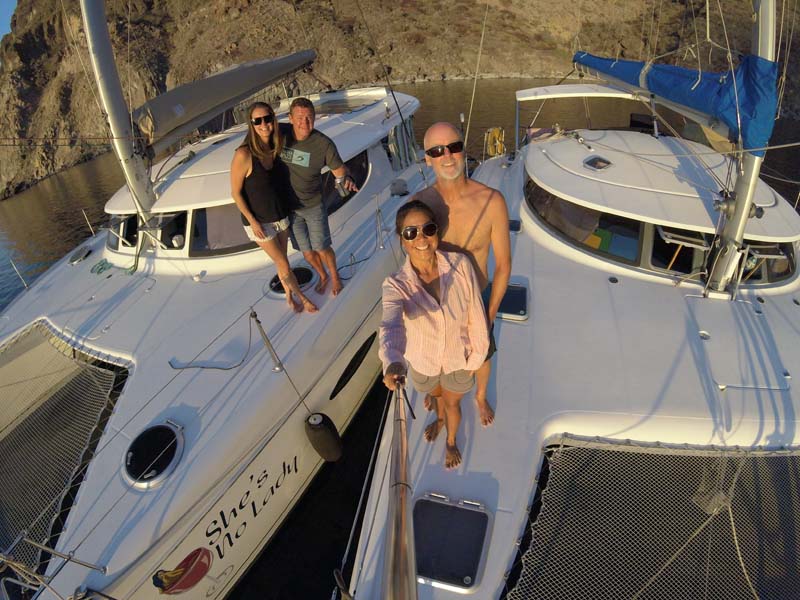 Then there’s Vicki on Volaré. While we’ve only known her and Jason for about a year, we’ve become really good pals. I suppose surviving tropical storms (Lidia) and Chubascos brings sailors closer together. Vicki headed home to California for the summer and Jason will stay with the boat until then. We will see Jason up in The Sea, but we’ll miss Vicki like crazy! She was my go-to-girl last summer in Bahía de los Angeles – hiking ashore, swimming, playing cards – and she’s irreplaceable. 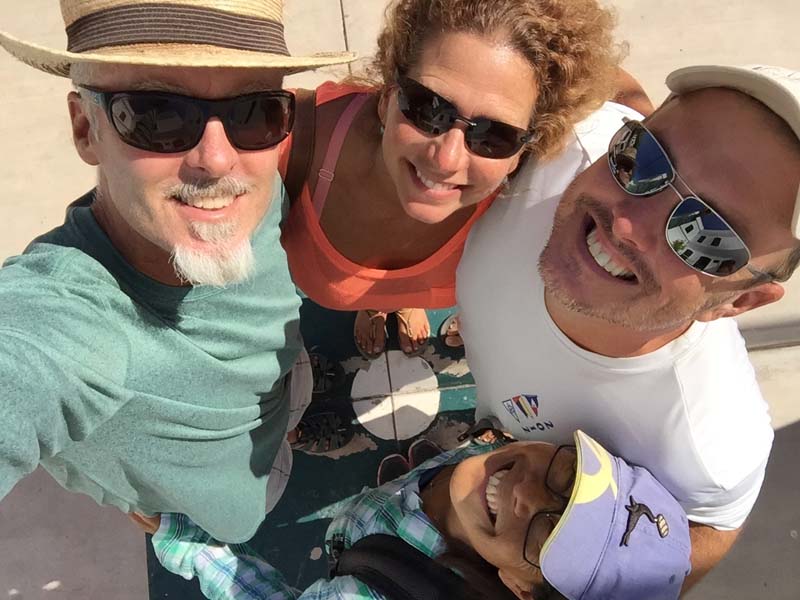 Finally, there’s Craig and Krystle of Small World. We’ve really only known them since January, but we became fast friends despite the fact that I’m barely older than their parents. They’re a wonderfully vibrant young couple with sharp wit and smarts, and we just love to be around them. We hope they’ll return to Mexico no later than this winter, so saying so-long isn’t as difficult, but still… 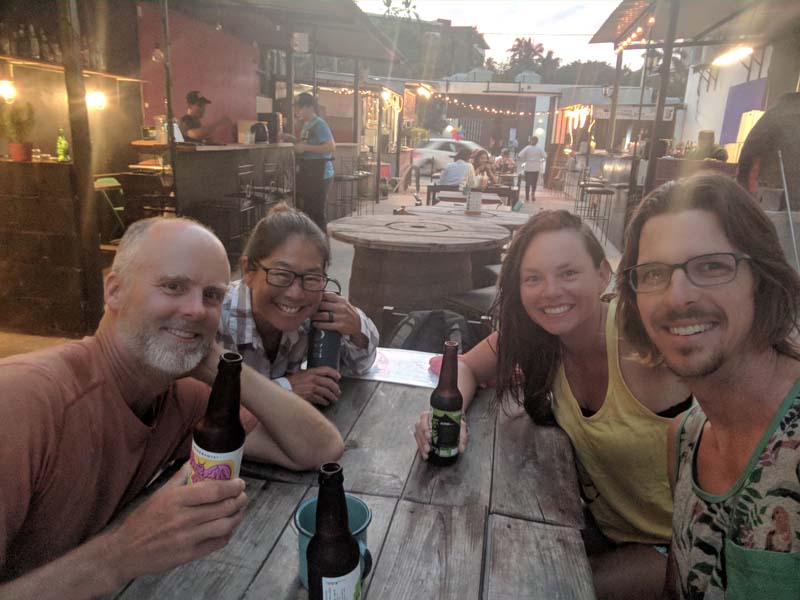 The bottom line? We’re so lucky to be living this life, and luckier still to have crossed paths with so many interesting, loving, generous, fun people. When it comes to parting ways and saying so-l0ng, we just hope that the stars align again someday and we see all these faces again – for real.

ADDENDUM – The Life and Logistics of a Cruising Sailor

Ok, to give you a little glimpse of a cruising sailor’s life and logistics, here’s the not-so-quick-and-dirty:

First, we need to back up to Summer 2017. We had some work done on da boat in La Paz, and the bottom paint job got screwed up. At that time, we’d arranged to take her back to the yard when we could (probably this fall) so they could redo the paint. Backing up even further to Spring 2017 on the mainland, we had our share of water-related equipment problems, and luckily discovered Rafa, a well-regarded Yanmar mechanic in Mazatlán. (Just FYI, we have two 18-hp Yanmars powering da boat; both are now about 16 years old, approaching 5000 engine hours and, therefore, need servicing.) Finally, for the sake of this story, you should know that our rudders do a fair amount of shimmy-shaking in their casings, so we need (we think) to replace the bearings – but first we need to get the parts, which were due to arrive Puerto Escondido with the captain of one of the cats participating in the Rally.

With all this in mind, we had planned to cross back to Mazatlán after the Rally and put FL at Marina Mazatlán or in the Fonatur yard for the duration of our summer travels so that Rafa could service our engines and we could replace the worn rudder bearings upon our return. Plus, while da boat was in the yard, we’d have some fiberglass/gelcoat work done, slap some bottom paint on her (this despite the fact that the La Paz yard is still on the hook for fixing its screw up), and splash. Then we’d cross back to The Baja and finish out the summer up in beautiful Bahía de los Angeles. Sounds reasonable, right? Right. Done. Reservation at the marina? Check. All arrangements for boat work arranged? Check. Plane tickets to/from Mazatlan purchased? Check.

Well, the rudder parts did not arrive Puerto Esco (or San Diego for that matter), and, to be clear, replacing the rudder bearings was the main reason for hauling da boat in the first place, as Rafa’s work could be done with da boat in the water. And with da boat out of the water, the fiberglass/gelcoat work and bottom paint were gravy (albeit expensive gravy). Without the rudder parts in hand, we started thinking about what a pain it was going to be to cross The Sea again (and then again), so we started looking into other alternatives to keep her on The Baja while we gallivanted around on land.

Tell me…is it worth it (both anxiety-wise and money-wise)? To NOT have to cross The Sea two extra times? Answer: YAASSSS. Done. FL will stay in Marina Palmira, LP Cruiser Supply will watch over her, we’ll fly out of LP to Tijuana and back (yes, thanks to a change fee), we’ll replace the rudder bearings upon our return (as they now sit in San Diego), the La Paz yard will fix the screw-up (we hope), and splash. Then we’ll head up to Bahía de los Angeles and the whale sharks. The financial bottom line? A few plastic bushings are costing us upwards of $1,100.

Thanks so much for these pics and vids. Hope to reconnect on land/sea! It’s the best of times, this present moment, and our memories of the giggles “hello free luff nation” sustain us til the next time!

Are you going to make it as far north as Gonzaga?

Cool! If you can send an email as your dates get closer, I’ll try to be home and stocked with cold drinks.